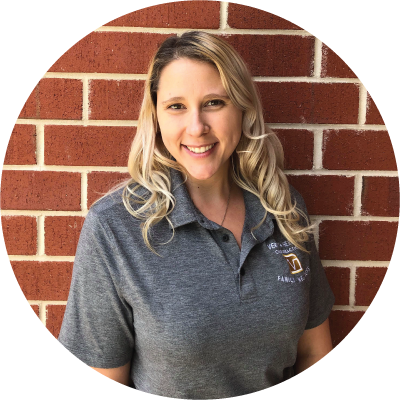 Dr. Brianne Schroeder was born and raised in New York State. She is the wife of an Army Veteran and has an orange and white fur child named Bo. She moved from San Marcos, Texas to Tallahassee, Florida last July to join the Verity family! Although she is still fairly new to Tallahassee, she is not new to the south. Dr. Schroeder has an associates degree in Travel & Tourism management and has spent time working for Marriott in South Carolina and Disney World in Orlando, Fl. During her last year in chiropractic school, she also was chosen to do an honor’s internship at the VA clinic in St. Petersburg, FL, treating veterans and active duty military members of all ages.
‍
Dr. Schroeder became interested in the chiropractic field after receiving care for her own back spasms that medication was unable to help. It was actually her own chiropractor that suggested she explore the field of chiropractic, and the rest is history. She graduated from New York Chiropractic College and is certified in Sacro-occipital Technique, Cox Flexion-Distraction, McKenzie Method for the Lumbar Spine, Activator Methods, and is trained on Webster Technique. She is part of the Texas, New York, Florida and American Chiropractic Association as well as the Women’s Chiropractic Association. Having seen the negative effects of medication and surgery, she has devoted herself to educating people on the alternative ways of healing ones body without costly operations or a prescription drug. Dr. Schroeder also has a Masters of Science in Clinical Nutrition, specializing in chronic disease prevention and is certified in Acupuncture! In addition, she is also excited to now be offering ARPwave therapy, a new and innovative way to find and treat the source of pain with a 96% success rate!

Thank you! Your submission has been received!

Oops! Something went wrong while submitting the form :(